1. Giraffes are the tallest mammals on Earth.

Their legs alone are taller than many humans—about 6 feet.

They can run as fast as 35 miles an hour over short distances, or cruise at 10 mph over longer distances.

Giraffes only need to drink once every few days. Most of their water comes from all the plants they eat.

Giraffes spend most of their lives standing up; they even sleep and give birth standing up.

The giraffe calf can stand up and walk after about an hour and within a week, it starts to sample vegetation.Despite the females’ attempts to stand over their calves during attacks by lions, spotted hyenas, leopards and African wild dogs (4), many calves are killed in their first few months.

A giraffe’s spots are much like human fingerprints. No two individual giraffes have exactly the same pattern.

Both male and female giraffes have two distinct, hair-covered horns called ossicones. Male giraffes use their horns to sometimes fight with other males.

Giraffes only need 5 to 30 minutes of sleep in a 24-hour period! They often achieve that in quick naps that may last only a minute or two at a time.

Whilst it was thought that giraffes did not make any sounds, this is now known to be untrue, as giraffes bellow, snort, hiss and make flute-like sounds, as well as low pitch noises beyond the range of human hearing. 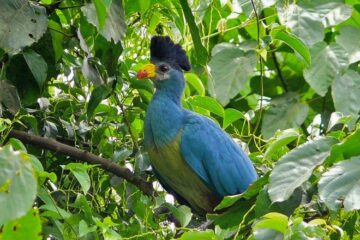 Bird watching tours start at 7am at Kanyanchu; you are advised to book in advance. Rare species include the Papyrus Gonolek, White-winged Warbler, White-collared Oliveback and Papyrus Canary. Bigodi Wetland Sanctuary, located just outside the park, is Read more… 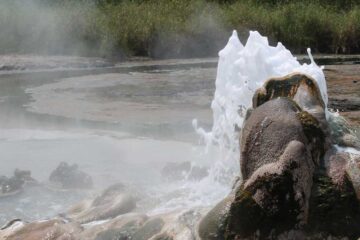 Semliki National Park sprawls across the floor of the Semliki Valley on the remote, western side of the Rwenzori. The park is dominated by the easternmost extension of the great Ituri Forest of the Congo Basin. Read more…

Uganda lifted certain COVID-19 restrictions, including opening Entebbe International Airport on October 1 and all land borders, allowing schools to re-open on October 15 for the candidate classes, permitting places of worship to gather, and Read more…